Posted on February 1, 2017 by Katherine Greig

The Choral Tales Project continues to receive appreciative response on its artistic path of service around the planet. The following is an overview of recent project activity and partnerships on three continents. 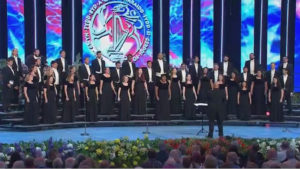 Bob Cole Chamber Choir from California State University, Long Beach, performing in Wales, where they won the 2016 Choir of the World Award. This choir is to record the works of the Choral Tales Project.

Enthusiastic response to the provisional recording of “The Happy Man’s Shirt” prepared by composer Ludwig Tuman, continues to arrive from around the U.S and many other countries. This is the first of the Choral Tales for which Ludwig has composed the music.

“I felt like I was listening to the voices of angels. I even imagined myself dancing …” wrote one project supporter in the Philippines. Another in San Mateo, California, called the composition, “Beautiful … I felt my breathing slowing down, and I drifted into a calm place! I can’t wait to hear the next chapters in this journey.”

A message received from a friend of the project in Beijing called the work “absolutely stunning,” adding that “It left me wanting more and imagining, with awe and delight, what the finished product might be like — what a tremendous accomplishment.”

Choral Tales Stories Translated for Use in Schools in Chile

Inspiring stories of the Choral Tales Project, re-told in the words of collaborating author, Shirin Sabri, were recently translated from English to Spanish for use in schools in a region of Chile. Doris Pacheco Soto, a Chilean children’s education specialist, who recognized the educational potential in the stories, proposed the initiative to the Choral Tales Project and is coordinating the translations.

The composition “The Happy Man’s Shirt” has also been selected for performance by the Bob Cole Chamber Choir of California State University, Long Beach, in its upcoming Spring Concert.

Dr. Jonathan Talberg, the choir’s renowned director and head of vocal and opera studies at the University, decided to include this Choral Tales work in the university choir’s selective concert repertoire shortly after receiving the work from composer Ludwig Tuman. His decision is a great compliment to both the composer and the project.

The Chamber Choir at CSU Long Beach is one of the finest collegiate choirs in the world and makes regular tours around the world. It won the prestigious 2016 international competition for “Choir of the World,” in Wales, an event in which choirs from all continents took part. All 40+ singers are voice majors and their sound.
Click here to see the Chamber Choir in action when they won the Choir of the World Award 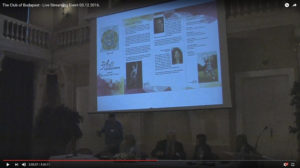 Choral Tales Project was included in the slide show at the Club of Budapest gathering, held on Dec 2-3, 2016 for the 20th anniversary of the Declaration of Planetary Consciousness.

The Choral Tales Project was included in the slide show at the Club of Budapest gathering, held on Dec 2-3, 2016 for the 20th anniversary of the Declaration of Planetary Consciousness.

The event was attended by speakers and guests from 25 countries. The program highlighted examples of projects around the world that promote oneness and positive change.

Also in Europe, a partnership has been formed between the Choral Tales Project and the National (sustainable) Fashion League in Budapest, Hungary. The League is an umbrella organization for a number of designers dedicated to sustainable fashion and the use of eco-friendly materials.

The League, a member of Fashion Council Europe, sees Choral Tales as a natural partner since one of the themes in the stories it is setting to music and dance is the care of the environment. Collaborative arrangements in this partnership are being made through Dr. Gabriella Walek, President of the League, and also President of Global Sustainable Fashion Week.

This entry was posted in 2016, News and Events and tagged choir, Choral Tales Project, Ludwig Tuman, music. Bookmark the permalink.