Artists Building Capacity as World Citizens hosted “Black Towns in 19th-century America,” a program about the experience of African-American life in the US, presented by Brad Randolph and Kevin Wade Mitchell at the Women’s City Club in Portsmouth, NH, Nov. 26, 2017.

The artists were the recipients of ABC-WC scholarships that funded their visit to the Smithsonian’s National Museum of African American History and Culture in Washington, D.C. last August. ABC-WC awarded the scholarships as part of its collaboration with the Black Heritage Trail of New Hampshire, in honor of the United Nations International Decade for People of African Descent. 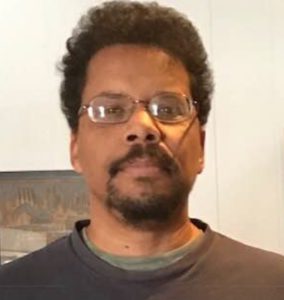 Both men have long been active in the evolution and growth of the Portsmouth Black Heritage Trail. This organization, established in 1995, works to preserve, celebrate and honor the history and culture of the African-American community in Portsmouth and the New Hampshire region, from its colonial-era African Burying Ground to the modern Civil Rights Movement. The Trail, which serves as a model across the country for raising public awareness and appreciation of local Black history, recently evolved into a larger statewide organization, the Black Heritage Trail of New Hampshire.

In keeping with the focus of the Trail, videographer/media artist Brad Randolph offered a media presentation that conveyed the lesser-known history of townships established by free people of color in the US. Drawing on exhibits in the museum and research of his own, Brad detailed the resourceful, cooperative nature of these communities that achieved both growth and prosperity despite unrelenting persecution and prejudice. Many of the values at the heart of these communities arose from community-building principles and values in African cultures, most notably that the needs of all must be honored and met. 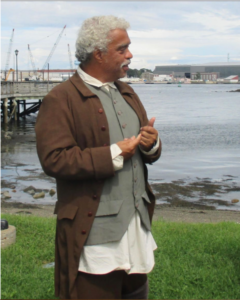 Kevin Wade Mitchell, an actor who has performed with several NH theatre companies, movingly portrayed in vignette-style a variety of individuals of African descent, both well-known and those whose stories have nearly been lost. Included was Frederick Douglass, whose home in the Anacostia district of Washington was a part of the August trip to the National Museum. Deeply influenced by this and by much of the biographical material in the museum’s exhibits, Kevin has begun to script a performance that he hopes to share with a wide variety of audiences, and junior-high and high-school youth in particular.
In the discussion that followed the presentation, audience members described the effectiveness of Kevin’s portrayals to be “as if we’re meeting this person.” Brad’s choice of a topic was praised as a means of gaining a far broader and more complete view of the lives of people of color in America’s early history, “one that extends far beyond the experience of enslavement, and also has resources that address needs we still have today.”

Kevin also serves as a Sankofa Scholar and guide for Sankofa Guided Tours, an educational program created by the Portsmouth Black Heritage Trail. The August trip to the National Museum of African American History and Culture, a four-day tour that included about two dozen participants, was organized by Sankofa Tours.