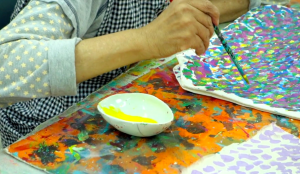 CantoMedia of Katonah, NY finished the purpose of a grant awarded in the fall of 2012 and completed August 2013. The goal was to create a short professional-quality video to use later for advance promotional preproduction of a possible future documentary film about the Shobu Gakuen School in Kagoshima, Japan.

Shobu Gakuen provides a place for adults with developmental challenges to live independently as they learn useful skills and receive high-level opportunities for artistic expression. Its goal is to empower residents to become creative and productive individuals in the community. Their work helps change perceptions about human capacity even when challenged, and connects the students with the wider world in a self-sustaining way. The Shobu Gakuen campus was designed as a residence with workshops for crafting furniture, paper, and pottery, running a bakery and noodle shop, and with producing handmade clothing. The school community has earned an international reputation for its artwork and traditional crafts, particularly its Nui (Stitching) Project.

At CantoMedia’s request, Shobu Gakuen’s executive director, Shin Fukumori, invited filmmaker Frank Canto of CantoMedia to visit the school and shoot documentary quality film about its pioneering work of building capacity through use of the arts. As an initial step in this process, the ABC World Citizens grant enabled CantoMedia to produce an 11-minute promotional video about Shobu Gakuen intended to later use to raise funds for a full-length documentary to be aired in the U.S. and Japan.

CantoMedia hopes to create an uplifting documentary about mentally challenged artists spreading a message of inspiration as their previously hidden potential is revealed, a literal demonstration of artists building capacity, and highlighting a learning environment that could serve as a model for communities worldwide.

CantoMedia would like to make use of the production of the documentary as a teaching project for advanced documentary students at the Jacob Burns Media Lab in Pleasantville, NY. Filmmaker Frank Cantor has specialized in award-winning films about artistic collaborations and international artists, including films about artists Roy Lichtenstein, Steinunn Thorarinsdottir, and Esmerelda Santiago.

The grant allowed CantoMedia to pursue three initial phases of the project in Fall 2012:

This entry was posted in 2013, News and Events and tagged CantoMedia, Nui Project, Shobu Gakuen. Bookmark the permalink.