Artists Building Capacity as World Citizens hosted New Hampshire actor Kevin Wade Mitchell, with the help of Sandi Clark Kaddy, in a dramatic performance, “Black My Story, Not His’Story” December 8 at the Portsmouth Public Library in Portsmouth, NH. This was ABC-WC’s second annual program in honor of the United Nations International Decade for People of African Descent. 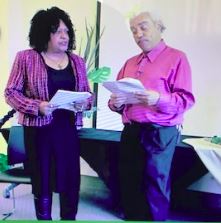 Sandi Clark Kaddy and Kevin Wade Mitchell in “Black My Story, Not His’Story”.

The performance’s format of story and music explored the life of Captain Paul Cuffee, an African-American shipping merchant who spoke out against taxation without representation and established a racially integrated school for the children in his eighteenth-century New England community.

The program also explored the courage and determination displayed by those who sought to escape slavery, and featured a segment about the life and death of Emmett Louis Till.

During the question-and-answer session that followed the performance, artist and audience discussed themes of civil and human rights, inclusion and exclusion, spiritual strengths and the contributions that people of African descent have made and are making in the United States.

Kevin Wade Mitchell, a graduate of the Elma Lewis School of Performing Arts in Dorchester, MA, has acted professionally for nearly 40 years. He has performed in musicals, dramas, Shakespearean theatre, concerts, commercials, and independent films. His acting roles have included Dr. Martin Luther King Jr. in the play “All the Way,” Malcolm X in “Project Unspeakable,” Frederick Douglass, and New Hampshire historical figure Jack Staines in “Thirst for Freedom.”

The actor also serves as a scholar and guide for Sankofa Guided Tours, an educational program created by the Black Heritage Trail of New Hampshire. Through the Trail’s efforts, a collaboration of churches, businesses, individuals, organizations, historical societies, and professionals of many backgrounds helped create the Portsmouth African Burying Ground memorial park, which honors the site where local residents of African Descent were buried in the 1700s and long forgotten. A moral counter weight to America’s painful history of racial prejudice, the memorial offers a model that inspires hope in Americans’ abilities to collaborate and build toward the future in the spirit of the UN International Decade for People of African Decent.

Sandra Clark Kaddy is a graduate of Elmira College in Elmira, NY, and holds a BA in Theater. She is thrilled and honored to be a part of Kevin Wade Mitchell’s new project. Sandi has been seen in many performance on the Seacoast and surrounding area’s for over 25 years, she has graced the stages of The Player’s Ring, SRT, Rochester Opera House, Newington, Capital Center for the Arts, Firehouse in Newbury Port, Dunnaway Center in Ogunquit Maine, Mill Pond Center for the Arts in Durham, NH and most recently making her debut for New Hampshire Theater Projects production of Men On Boats at West End.

Sandi’s love for theater began at a young age, when her mom would write skits to keep her and the other nine siblings occupied. Of course they had to perform them at family and friends functions. She is the proud mom of two sons, Kenneth and Christopher – check out the smile when anyone mentions her grandson Nathaniel. When Sandi isn’t working at the Ogunquit Playhouse you may find her digging in the garden, feeding the birds, riding on the back of a motorcycle and of course onstage performing.  She is the founder of “Jukwaa Mazoa” (Swahili for staged productions), doing everything from acting, directing, producing, costumes, casting whatever it takes to get the show up and running. She is a strong community supporter and volunteers for various New Hampshire-based non-profits including the Seacoast African American Cultural Center and her church.